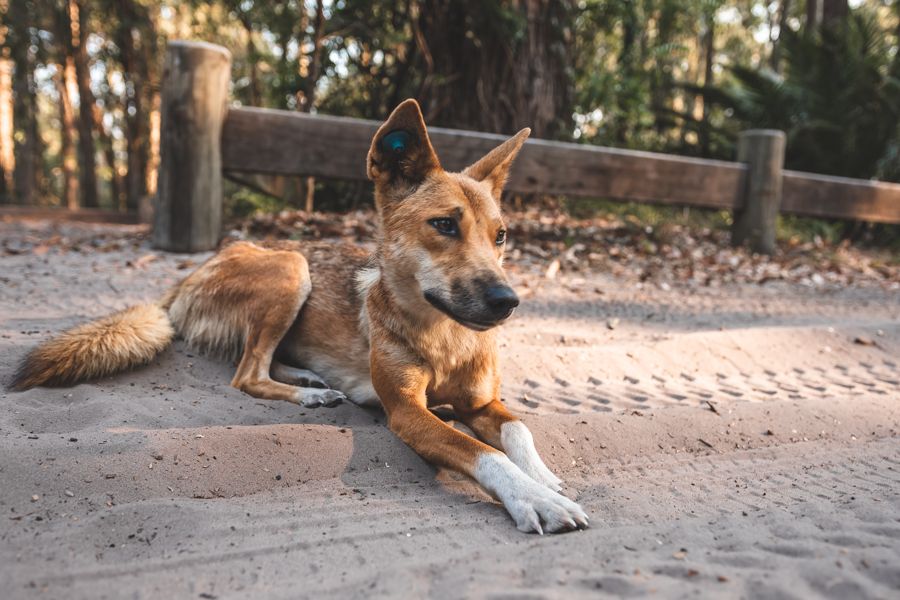 The purest population of dingoes in the world is located on Fraser Island and no Fraser trip would be complete without sighting this iconic animal. Although they may look cute, and resemble a domestic dog, it is important to remember that this native species is a protected wild animal and best viewed from afar. You may have heard of the dingo-proof, or dingo-deterrent fences that have been installed at various locations around Fraser Island. These fences are for the safety of both humans and dingoes and it is advisable to make use of these safe spaces while travelling on the island. 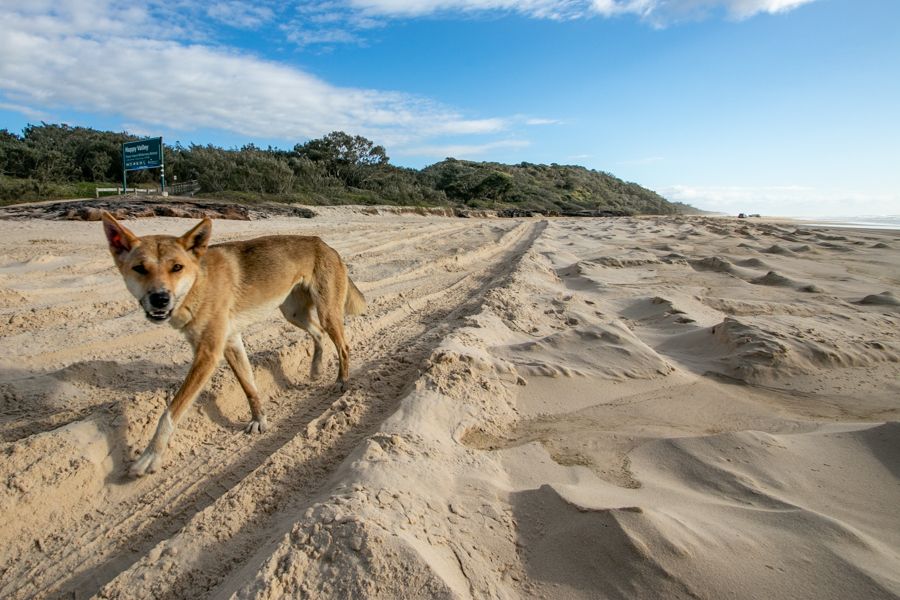 What is a dingo-deterrent fence?

A dingo-deterrent fence is a wire fence that is used to keep dingoes on the outside of a specific area that is designated for human use on Fraser Island. This is for the safety of dingoes as much as for the safety of people. Pedestrian access to the fenced area is via a spring-loaded gate which closes quickly once someone has passed through. Vehicles wishing to enter the fenced area must cross over a metal dingo grid. Dingo grids are similar in design to a cattle grid and use solar-powered electrified wires with low voltage to deter the dingoes from crossing. The mild shock delivered when touched does not harm the dingo in any way and, similar to cattle, dingoes soon learn not to cross the grids into the fenced areas. 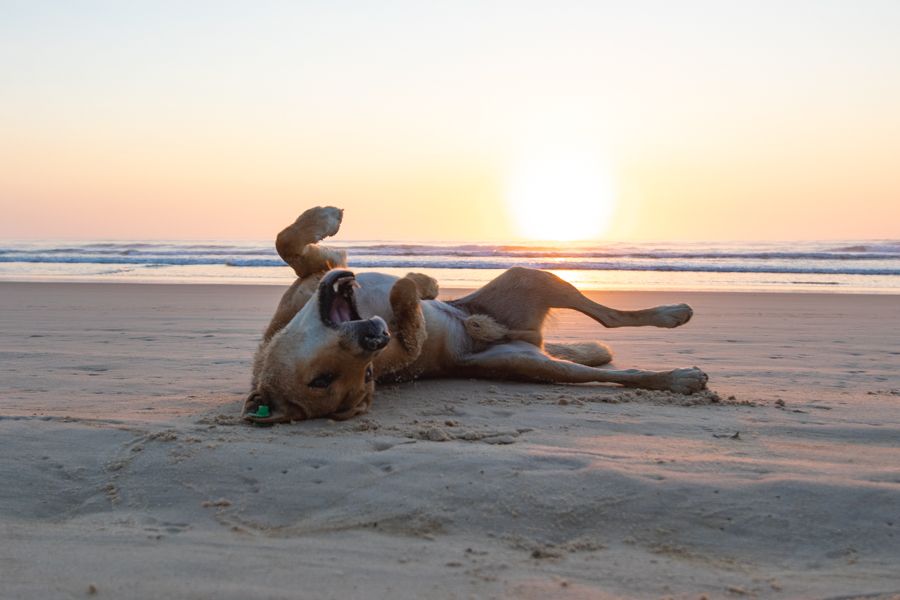 Dingo-deterrent fences and grids were installed on Fraser Island to limit the amount of negative dingo-people interactions that sometimes occur. Both a wild animal and opportunistic scavenger, a dingo that is fed by people or learns to scavenge food from campsites and townships quickly realises that food is easily available and will return repeatedly to the food source. Once these habits are formed, the dingo will display increasingly aggressive behaviour and become a high risk to people, especially children, in these areas. In a worst-case scenario, a dingo may have to be humanely euthanised to protect visitors to the area. Dingo-deterrent fences and grids have been very effective in limiting these negative interactions in areas with a high concentration of people and will continue to be used to ensure that dingoes can roam wild and free across the island. 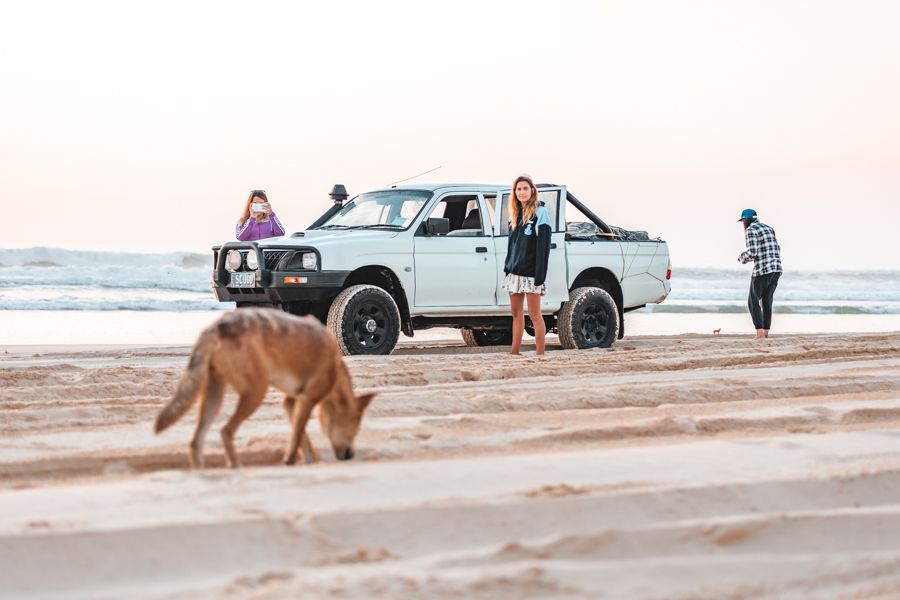 Where are the dingo-deterrent fences & grids located?

Following the identification of some high-risk areas, dingo deterrents have been installed at various townships, resorts, camping and rubbish disposal areas.

Here’s where you will find dingo-deterrent fences and grids on Fraser Island: 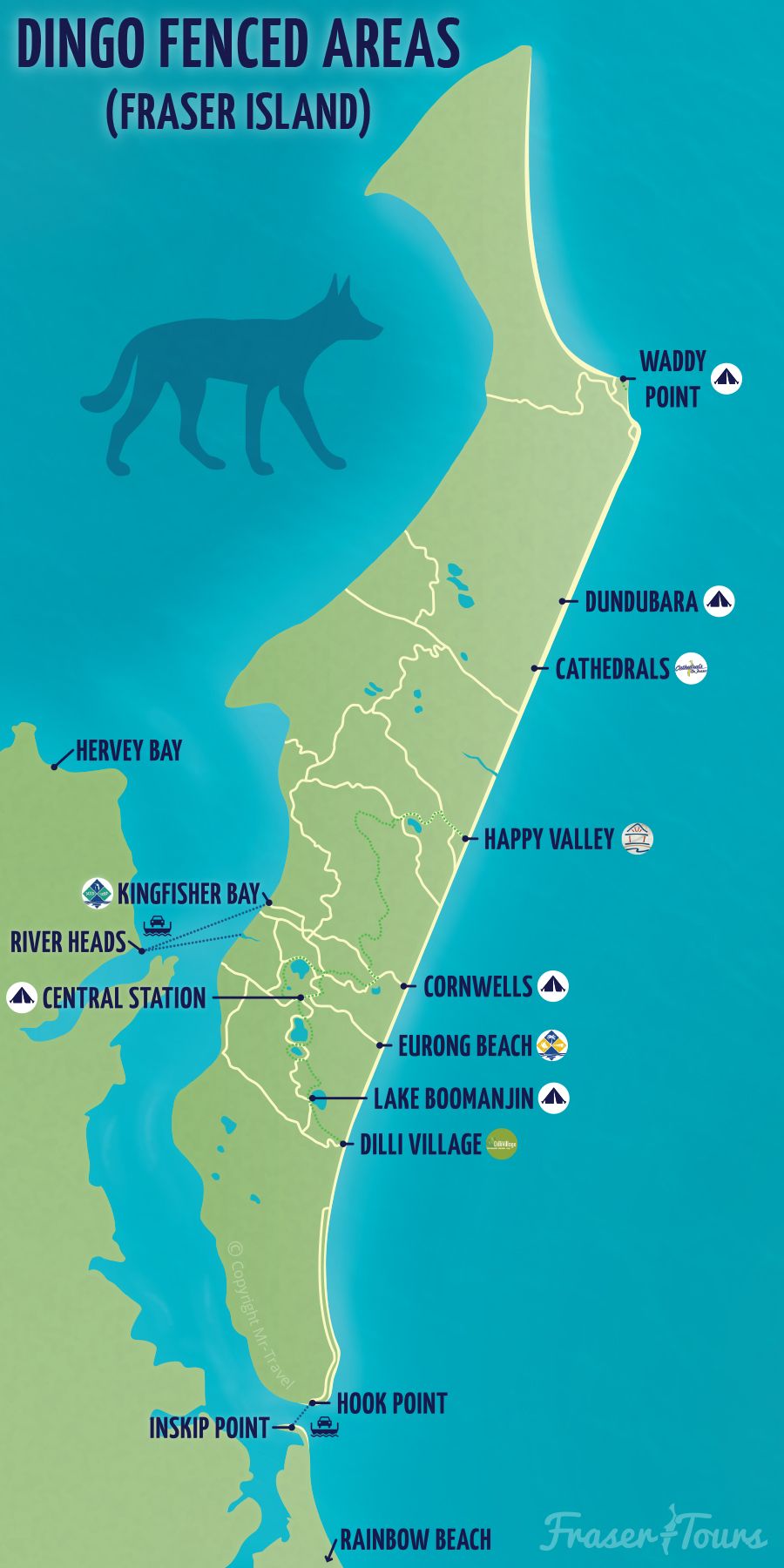 Happy Valley township is a fully-fenced community with 3 dingo grids located on the Eastern Beach of Fraser Island. Around an hour and a half drive from Hook Point, this township provides amenities such as fuel, food, a bar and bottleshop.

Kingfisher Bay Resort is an award-winning resort village located next to the ferry terminal in Kingfisher Bay on the west coast of Fraser Island. Completely surrounded by a dingo fence, The Village has a huge range of facilities including pools, restaurants, bars, a general store and fuel outlet.

Eurong Beach Resort is another fully-fenced resort village. To reach this resort, travel along the infamous 75 Mile Beach one hour north of Inskip Point or east of Kingfisher Bay Resort or Wanggoolba Creek.

Dilli Village is a fully fenced camping area located 25km up the beach from Inskip Point. This facility is privately-owned is also used as a Research and Learning Centre for schools and universities.

Cathedral Beach, also known as ‘Cathedrals’, is another privately-owned campground as well as a shop and fuel station surrounded by a dingo-fence. Cathedrals is located just over halfway up the east coast of Fraser Island.

Lake Boomanjin Camping Area is a fenced camping area ideal for families with children. Located approximately 18km south of Central Station or 12km to the north of Dilli Village, this campsite accommodates tents only - vehicles must stay outside the dingo-deterrent fence.

Dundubara Camping Area is a large fenced camping area behind the dunes on the central east coast of K'gari, approximately 75km north of the Hook Point barge landing area. Access is by high clearance 4WDs and off-road camper trailers only.

Waddy Point Camping Area, a fenced coastal woodland campsite near Indian Head on the north-east coast of Fraser, is located approximately 100km north of the Hook Point barge landing. Travellers, beware of the soft sand and rough track conditions leading into the campsite.

Cornwells Organised Group Camping Area is a large fenced area close to the beach and just over 6km from Eurong Township. Access is via the defined foredune tracks only, not over the dunes or native vegetation and is for organised group camping only, and therefore not open to everyone. 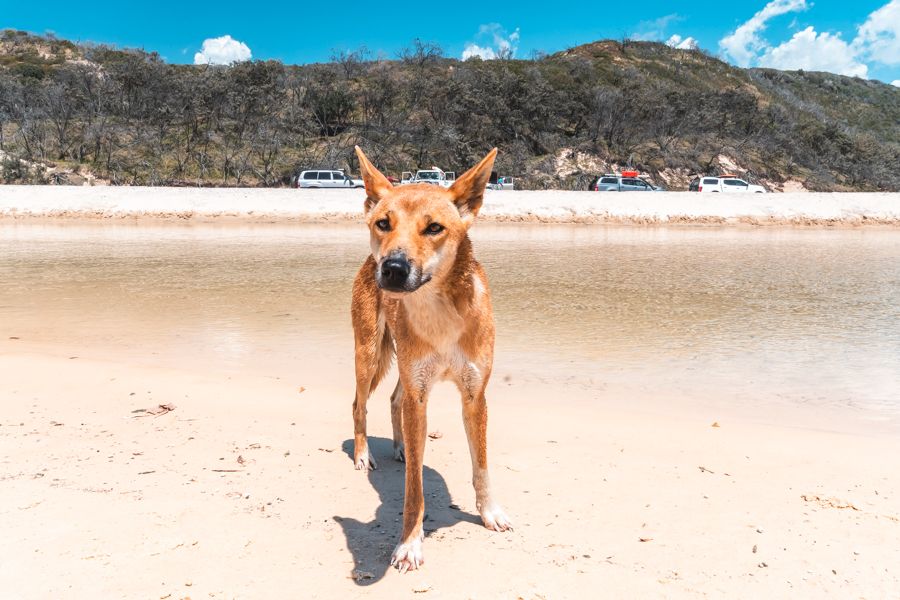 Important things to remember when camping:

When camping on Fraser Island, it is recommended that all families with children under 14 years of age set up camp within a dingo-fenced area. ‘It is an offence to feed or make or leave food available for wildlife, regardless of being inside or outside a fenced area’ and penalties apply (QPWS). Store all food in a lockable or secure container or inside a closed car. Be sure to use the metal dingo-safe food storage lockers provided at many walk-in campsites.

Dirty dishes are a source of temptation for dingoes and should not be left lying around. There are specially designed dingo-safe washing up areas within the fenced main camping areas and these can be used by anyone regardless of if they are staying in the camping area or not. Think safety when leaving a fenced area and close the gate. Never prop a gate open or walk over a grid and always report any faulty gates to QPWS Rangers. 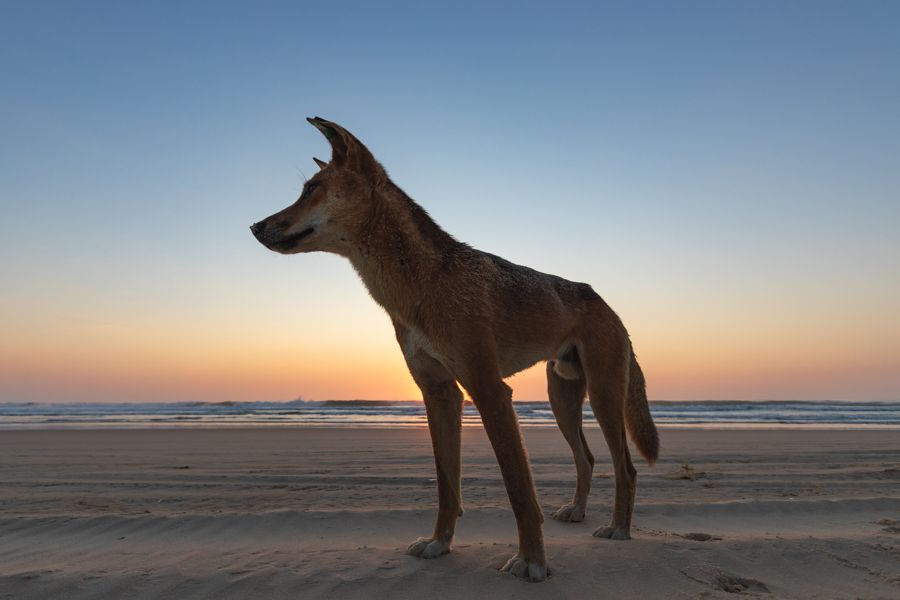 It is vitally important that all visitors to Fraser Island place all rubbish in the safe disposal areas provided and never leave any rubbish or bags lying around. This will ensure that dingoes cannot raid the bins for food.

All Queensland Parks and Wildlife Services (QPWS) waste transfer stations are fenced and can be entered via a spring-loaded gate.

You can find the QPWS waste transfer stations here:

While many travellers will never have a negative encounter with a dingo on Fraser Island, it is important to educate yourself and be aware of the potential risks when entering a wild animal’s habitat. Always follow safety guidelines and make use of the infrastructure provided - Be "DingoSafe" on Fraser Island!

To learn more about dingo safety before heading to Fraser Island, click here. 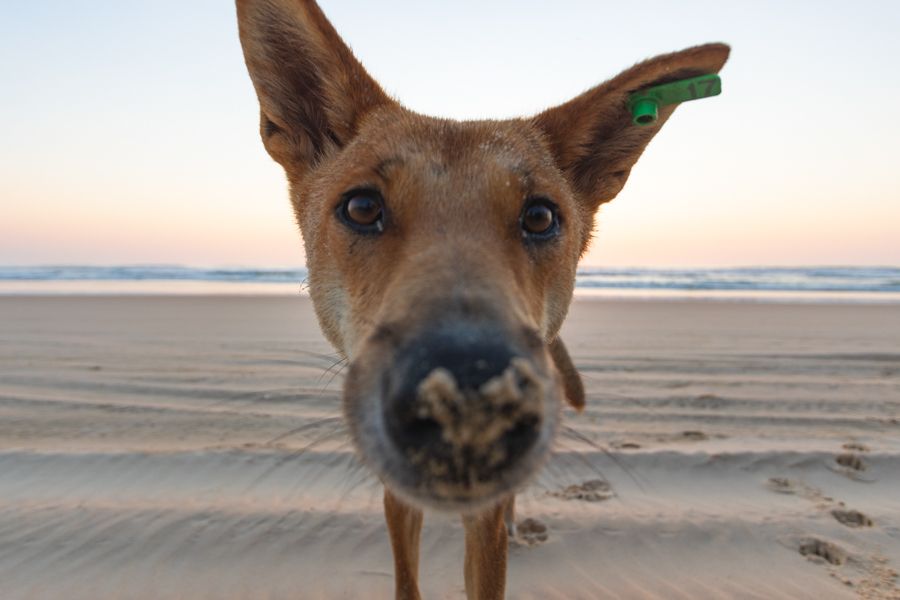 Ready to meet some of these incredible animals in the wild on K'Gari? Chat to us live or free call 1 800 550 751 anywhere in Australia!