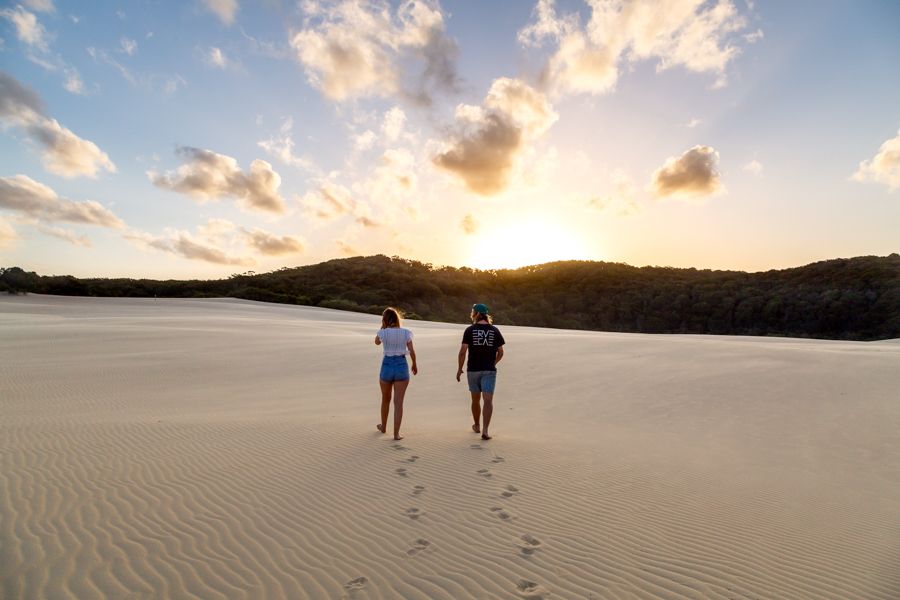 Fraser Island is the largest sand island in the world. Its base is made up completely of sand, which began its life hundreds of thousands of years ago. Wind, waves and ocean currents moved sands from all around the world, including mainland Australia, where it began to pile up in one place. As it began to accumulate, it eventually breached the surface and began to form the island we now know as Fraser Island. After many years and much, much more sand, the island now measures 120km by 15km. Animal matter and debris started a base from which plants began to grow, which is why the island has trees and plants and can sustain life though it is made of sand.

The landscape of Fraser is made up entirely of sand dunes. A sand dune by definition is a hill of sand that has been formed by the wind. The movement of sand through the help of the wind creates stunning sand dunes on the island, creating hills, mountains and all the dips and bumps its visitors come to know. As they form, they have the ability to cover forests and plant life as they shift and deposit themselves around the island. How and when they move is dependent on wind strength, moisture and rain as well what types of obstacles it has in its way.

A sand dune is much more than just a pile of sand that accumulates overnight. It can take thousands of years for one to grow to the point of stability. A dune is considered stable when plant colonies take root, where it becomes a much more permanent structure. The younger dunes on Fraser Island that are closer to the water and more subject to weather often have grasses and other coastal plants covering them, while more sheltered central dunes on the island can support diverse plant communities and rainforests - making Fraser island is the only place in the world where rainforests actually grow on top of sand!

The sand dunes on Fraser Island are what make up the landscape of the island that its visitors know and love. The younger more fragile ones are protected, meaning that drivers must stick to roads and routes already mapped out to ensure the island is able to continue developing and thriving. The dunes make a stunning backdrop for any Fraser Island vacation and are definitely part of Fraser's beautiful charm.